DEXIA signs off on pilot agricultural project with young entrepreneurs

Roseau, Tuesday 9th November 2021: With a recent contract signing at the Agency’s Bayfront head office, the Dominica Export Import Agency (DEXIA) has cemented a one-year deal with two young entrepreneurs to implement their Ceres Agriculture e-commerce app, which will collect and process data on sales of fresh produce received and processed at DEXIA’s Multi-Purpose Pack Houses (MPPH).  Through this agreement and pilot programme, the use of the app will serve as both a proof of concept and a means of data collection for both parties.

The brainchild of Ceres Agriculture founders, Alick Lazare Jr. and Diamond Kelshall, the Ceres Agriculture app was created to collect data on farmers, most notably, the type and availability of the various produce they harvest and sell and to also serve as a platform for Interested buyers to access this data to place and track orders online.

“This app is about creating a very efficient and easy stream of communication between organisations like DEXIA, farmers that supply them and also large-scale buyers like supermarkets, says Lazare, Head of Research and Development at Ceres Agriculture.

Under this pilot agreement, DEXIA will connect Ceres Agriculture with farmers who will make up a test group, providing key information which will be uploaded to the app. This data will be used to understand the viability of Ceres as a business platform and will be further analysed to iron out any areas for improvements in ease of use. Data will also be submitted to DEXIA for use in enhancing its operations.

According to Kelshall, Head of Marketing at Ceres, both parties to the agreement stand to gain significant benefit by end of the 12-month period.

“In one year, we hope to amass as much data as possible on local crops, livestock and our local market and develop the app to make it easier for farmers to use and to be applicable to the general public as well.”

DEXIA’s General Manager Paula Platsko shares similar sentiments. “It is our hope that this Ceres Agriculture software application, will assist in enhancing DEXIA’s capabilities to interact with farmers, exporters and hucksters in providing timely market statistics which will allow us to make informed purchasing and sales decisions”.

This initiative falls in line with Government’s digital transformation efforts, recently highlighted by Prime Minister, Hon. Roosevelt Skerrit, who during his 2021 Independence address on Wednesday 3rd November 2021, indicated Government’s interest to spend “over EC$75 million on activities to spur innovation, productivity and growth” in several areas to include entrepreneurship development.  As Hon. Skerrit has said, there is “no turning back [from] the digital revolution.” DEXIA is surely embracing the realities of our increasingly digitised world.

MPPH operations will therefore benefit from this digitisation of both supplier and customer content.  Head of Operations at the MPPH, Bristol Lawrence sees this is an opportunity and a move in the right direction to improve efficiencies at the MPPH.

“We believe with the Ceres app; it will help increase our marketing efforts- especially among young farmers. It’s an exciting programme which we believe will help farmers to market and bring greater efficiency towards our efforts at the Pack Houses.”

The Roseau and Portsmouth Pack Houses were constructed with funds from the European Union (EU) and commissioned in 2016 with funds from the Government of the Commonwealth of Dominica (GoCD) and Caribbean Development Fund (CDF).  These two locations are the main processing plants for fresh produce leaving the island. The Pack Houses adhere to strict international standards and compliance codes.   Apart from processing produce for export, the Goodwill and Portsmouth locations, produce value-added products in the form of frozen dasheen chunks, passion fruit pulp and hot pepper mash.

For further information on MPPH and/or Ceres Agriculture contact DEXIA at 448-2780, 448-3494 or info@dexiaexport.com 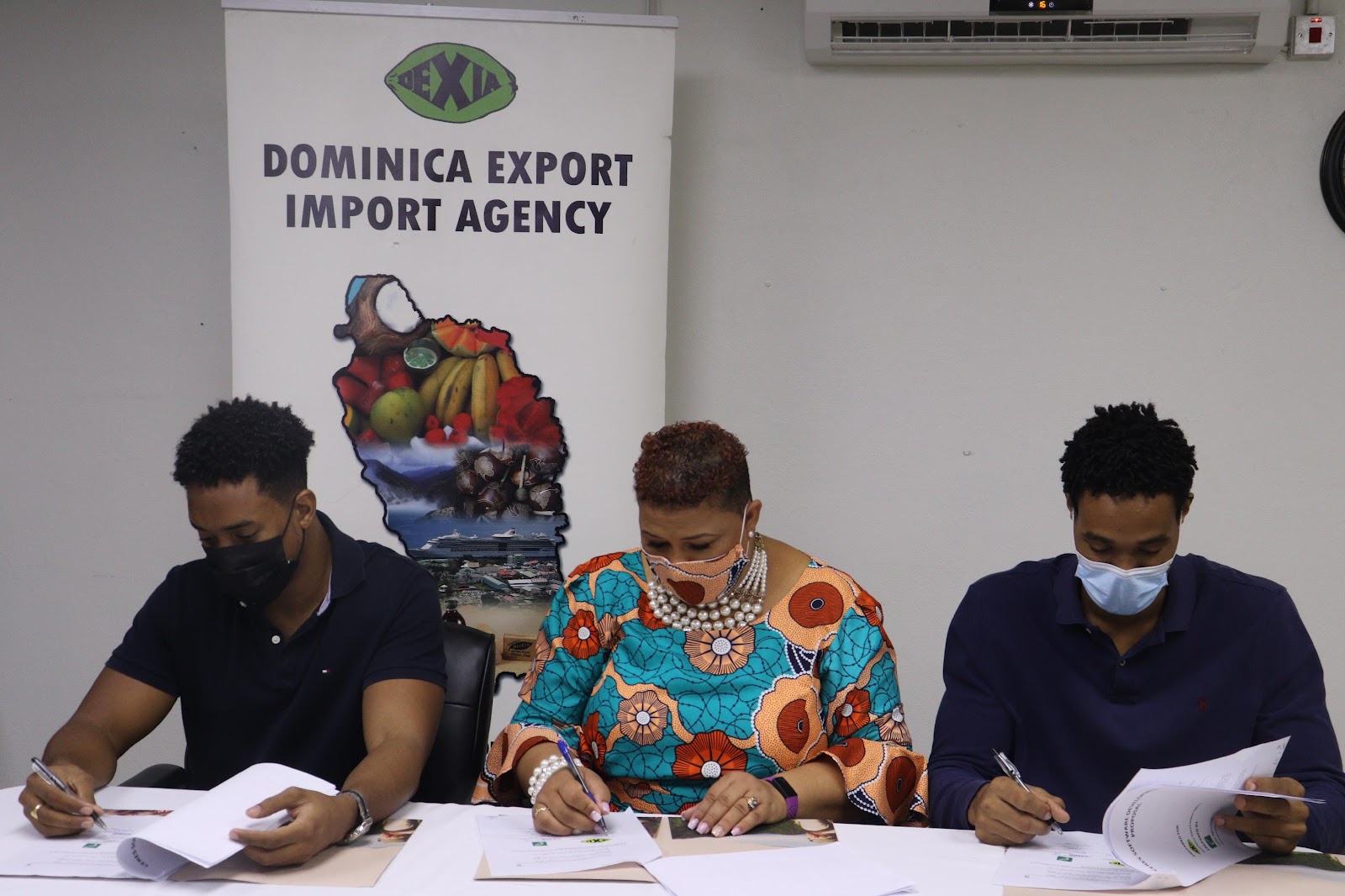 AUDIO FROM THE FOLLOWING

The Dominica Export Import Agency (DEXIA) is a public sector institution established by Act No. 14, and came into existence on July 1, 1986. DEXIA was created to spearhead the development of the export of Dominica’s agricultural and agro-processed products.

DEXIA focuses on six priority sectors (as laid out in the National Export Strategy), in which it would play a key role in building capacity and competitiveness. They are: Agriculture, Agro-processing, Energy and Natural Resources, Cultural Industries, Professional Business Services and Tourism.

In addition to exports, DEXIA is the sole importer of bulk rice and sugar in Dominica. The Agency also oversees two multipurpose packhouses in Roseau and Portsmouth respectively. The Export Promotion and Development Department, Commercial Department (which handles sale of rice and sugar), the Central Services Department (which deals with HR, administration) are all located at its office on the Dame Mary Eugenia Charles Boulevard. The Agency functions as a Trade Promotion Agency (TPO) and is attached to the Ministry of Trade, Commerce, Entrepreneurship, Innovation, Business and Export Development.

No comments to show.

Stay connected with us

Subscribe to our newsletter and get the latest information